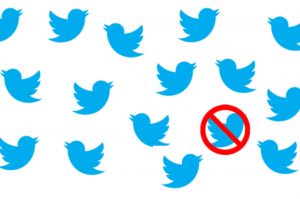 Twitter has had its ups and downs over the last few years. Its growth has leveled off (but they still maintain over 300 million active users). Lots of celebrities and even the current U.S. president have achieved notoriety with their tweets. Throughout its history, however, Twitter has been considered one of the most open and transparent social media sites. This may be changing as the social media site is now implementing policies that restrict certain words, topics and accounts.

The justification for these policies is to protect users. It’s still not clear exactly what form this censorship will take and Twitter itself is being fairly vague about it. Any type of limits of free speech on Twitter, however, is sure to create a great deal of controversy. Let’s look at how Twitter may be restricting certain speech and what effect this is likely to have for users and for society in general.

While social media is widely considered to be an open forum for all points of view, there have always been certain restrictions. Threats, harassment and support of terrorism, for example, are suppressed by Twitter and other social media sites. For example, Twitter has shut down many accounts associated with terrorism. This type of action is fairly uncontroversial and is seldom labeled censorship. It’s a version of the old argument that free speech doesn’t permit you to yell “fire” in a crowded building when there’s no fire. But now Twitter appears to be restricting a wider range of online behavior.

Twitter, along with other social media sites, has long discussed implementing a hate-speech filter. “Hate speech,” of course, is not a precise term and so far the company hasn’t provided specific details on how it defines this term. The latest policy involves suspending people who violate its acceptable speech policy for a half day. Even this doesn’t prevent people from using the platform. It only restricts visibility of tweets to one’s followers. This, on the surface, may not seem overly draconian. The problem is that once this type of policy is in place, there’s no telling how widely or arbitrarily it will be enforced.

In addition to banning certain accounts, Twitter is also placing restrictions on its search function. This is a more subtle type of restriction, one that doesn’t directly prohibit free speech. Rather, it limits the public’s ability to find certain content. Of course, the result is the same. If no one sees a tweet, what’s the point? Twitter is also restricting words that have nothing to do with hate speech.

As U.S. News reports, Twitter is currently filtering words related to marijuana, such as “pot,” “weed” and “cannabis.” During a time when marijuana legalization is an issue in many states, it seems strange that the social network would restrict people from looking up such information. Technically, Twitter isn’t censoring posts containing these words. Users can opt out of the default filter and see these posts. However, it’s safe to say that many, if not most users won’t bother to do this.

It’s not only hate speech and drug-related posts that are causing controversy for Twitter. One of its purported aims is to limit “low quality” tweets, which is a term even more vague than hate speech. According to some reports, the social media site is applying this standard in a politically biased manner. For example, some users claim that Twitter is censoring posts in support of President Trump and giving free reign to tweets critical of him. Twitter has suspended the accounts of several members of the alt-right, including Richard Spencer, founder of the controversial National Policy Institute and Milo Yiannopolous, editor of Breitbart News.

Since Twitter is a private company, it has the right to allow or suppress anything it wants. It’s not literally censorship if a magazine refuses to publish an article or letter-to-the-editor. Similarly, social media sites such as Facebook and Twitter are free to choose their own policies and restrictions. However, in practice, very large social media sites have a great deal of power. Banning a Twitter account or even restricting searches, even if it falls short of the legal definition of censorship, does seriously limit the public’s access to certain views.

The overall effect of this type of policy is likely to make mainstream social media sites more bland and mainstream, with less popular views marginalized. There are some potential problems with this type of policy. For one thing, it’s likely to make society even more polarized than it is now. People whose accounts are banned and their followers, unable to express themselves on Twitter, are more likely to move even further to the fringes.

There’s also the more fundamental point that when a major media outlet restricts any type of speech, the net effect is less freedom. Kalev Leetaru, in an article on Forbes.com, calls this a “Pandora’s Box” that threatens the very existence of free speech. The problem with limiting certain terms or topics is that it’s always difficult to know where to draw the line. Adding to the problem is that Twitter is not at all transparent about its policies. This means that, at least for now, the company is exercising editorial privilege on a case-by-case basis. Without knowing the rules, it’s hard for people to abide by them.